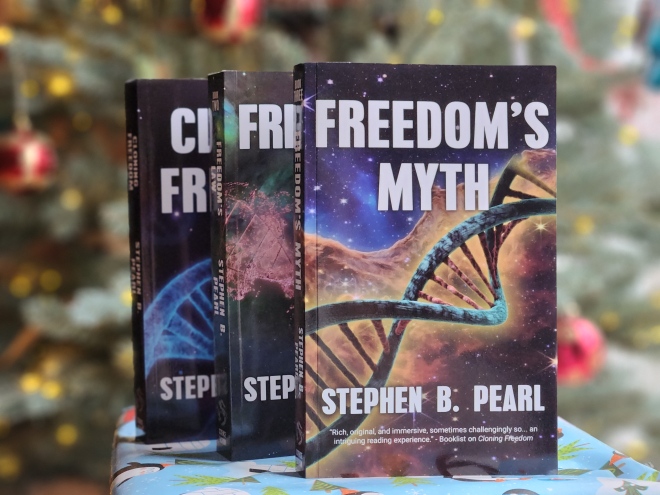 Pearl’s third book release of the year continues the story started in Cloning Freedom (2020) and Freedom’s Law (2021), telling the tale of cloned protagonists Ryan and Rowan in their attempt to escape the oppressive conditions of clones in the far-future United Earth Systems into the alien-run Galactic Republic. Booklist, which lauded the first installment as “an intriguing reading experience”, says, “Series fans will be pleased with this entry.”

As part of the book’s release, publisher Brain Lag will be hosting a livestreamed launch party on Twitch on Saturday, December 10 at 6:00 p.m. EST. It will feature an interview with the author, readings, and a Q&A with the chat. The event is free to attend and no registration is required.

The author frequently appears at arts events around the Hamilton area, which are announced on his Facebook page at https://www.facebook.com/StephenBPearl. The book will also be featured with the rest of Brain Lag’s titles at A Magical Christmas Market at the Milton Mall in Milton, Ontario on Sunday, December 18 from 11:00-5:00.

Pearl, who has worked as a lifeguard, SCUBA diver, EMT technician, and more, is known for thoroughly researching the worlds and technology he writes about, and has hosted many workshops and panels at conventions and online on a range of topics. Freedom’s Myth follows up his other 2022 releases, Revenant and The Mistletoe Spear. The fourth book of the Freedom Saga, Arming Freedom, is scheduled for release in December 2023.

Milton, Ontario-based SFF publisher Brain Lag has previously published the author’s Tinker’s World series, Tinker’s Plague and Tinker’s Sea, post-apocalyptic science fiction set in southern Ontario, along with a short story in its 10-year anniversary anthology The Light Between Stars. Freedom’s Myth is Brain Lag’s final release of 2022 and its 41st title, a lineup that has doubled since the release of Cloning Freedom.

Media inquiries and requests for reviews copies or to contact the author may be directed to publishing@brain-lag.com.