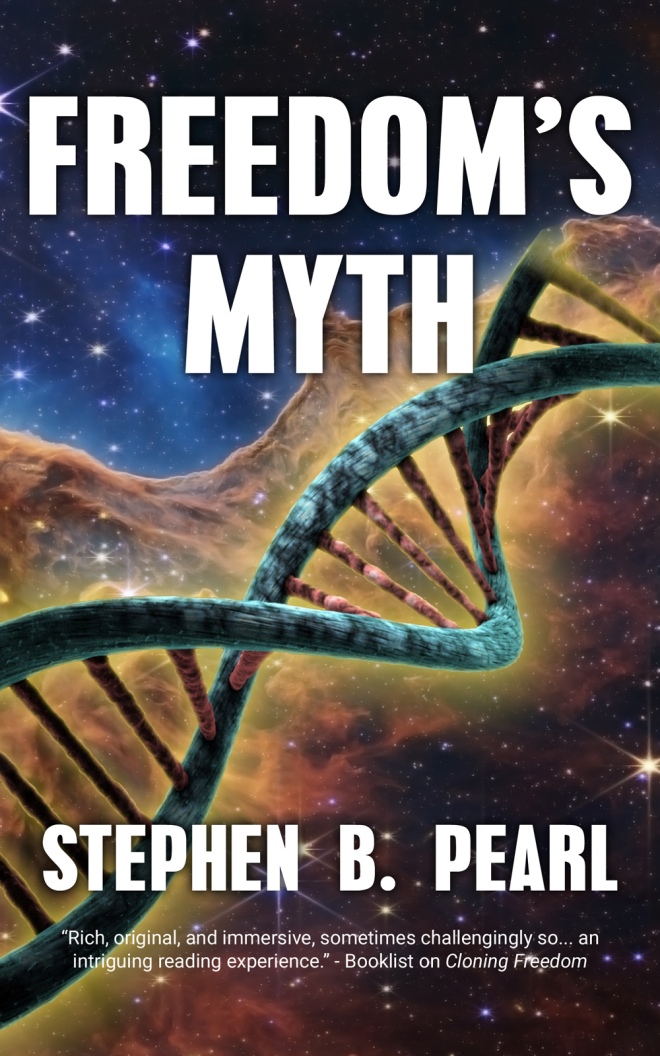 MILTON, ONTARIO, August 19, 2022 – A mere two years after the first book in the series was released, the third book of author Stephen B. Pearl’s Freedom Saga comes this December. Freedom’s Myth continues the story of runaway clones in a far future galactic republic and the humanity-spanning ramifications of their flight for liberty.

The cover art for the book was revealed today, showing a computer image of a DNA strand superimposed over an image of the Carina nebula, an image released by NASA on July 12, 2022, taken by the James Webb telescope. The Freedom Saga takes place in a fictional distant galaxy connected to the multi-planetary United Earth Systems by stargates.

Preorders also opened for the book today, which will be available in trade paperback (354 pages, MSRP $22.99 CAD) and ebook ($4.99 CAD/USD) formats. As with the previous books in the series, it will also be available in a special dyslexia-formatted edition (486 pages, $26.99) with larger character and line spacing, non-justified text, and bold type instead of italics for emphasis or unspoken character dialogue.

The Story So Far

In the first book of the series, Cloning Freedom, readers were introduced to a spacefaring future in which humanity has a divisive attitude toward clones. Ryan, a decorated war veteran whose medical cloning causes him to be discriminated against, is working as a technician on an e-entertainment using genetically modified clones as stars without their knowledge. When he learns that Rowan, one of the ‘characters’, is scheduled to be killed off, he rescues her and embarks on a daring escape toward the safety of the Galactic Republic, where they will both be considered people under the law.

In the second book, Freedom’s Law, the genetic modification and quick-clone process used to create Rowan has resulted in severe health problems and Ryan struggles to find a doctor who can provide the necessary treatment who will not immediately turn her over to the authorities.

Now in Freedom’s Myth, legal actions against Ryan cause him and his starship to be co-opted for relief efforts to the same devastated planet where he gave his original body in service to the UES. Their new crew, including an AI in a mangled android body and an alien with a shady past, onload passengers and cargo for a mission that has seen previous attempts lost without explanation.

Politics drive the story throughout the series, as the idea of Rowan’s liberation triggering a clone rights movement causes the United Earth Systems to fear bankruptcy due to the loss of its prime export—e-entertainments. As a result, the UES resorts to whatever underhanded measures it can use to try to recapture Rowan, which will certainly result in her death. A wide cast of characters with personal motives or deeply held beliefs both utilize the opportunity Rowan’s escape presents and help, or hinder, their progress.

The Freedom Saga has been praised by critics, with Publishers Weekly saying of Cloning Freedom: “Life imitates art a little too closely in this frenetic space opera caper. Pearl plays a confident game with his multiple worlds-within-worlds, running parallel scenes from the entertainment programs and the bridge of Ryan’s restored spaceship to wryly comment on how, even when his characters think they are in charge, their strings are being pulled by others.”

Booklist adds, “The world Pearl has created in Cloning Freedom is rich, original, and immersive, sometimes challengingly so. Readers who are up for the challenge of navigating both the massively complex alien society and the complicated, multilayered plot will be rewarded with an intriguing reading experience.” Liminal Fiction said, “This is a fast paced, satirical, sci-fi story about living vicariously through slaves… frenetic pace, gonzo humor, militaristic flavor and gentle landing.”

A Prolific and Wide-Ranging Author

Pearl is the author of over a dozen novels from several publishers, from virtual cyberpunk adventure Cats to dimension-hopping fantasy romance Worlds Apart. Freedom’s Myth joins two other releases by the author in 2022, Revenant, the sequel to a Toronto-based urban fantasy mystery novel, and The Mistletoe Spear, a Viking heist fantasy taking place during the endless darkness of Ragnarok and steeped in Norse mysticism. Pearl is heavily involved in the arts and writing community in his native Hamilton, Ontario and is a member of the Horror Writers Association. He has held panels on numerous topics at various online and in-person conventions and will be hosting several more during Fan Expo, Toronto’s largest fan convention, taking place August 25-28.

Milton, Ontario-based SFF publisher Brain Lag has previously published the first two books of the author’s Tinker’s World series, Tinker’s Plague and Tinker’s Sea, post-apocalyptic science fiction set in southern Ontario, along with a short story in its 10-year anniversary anthology The Light Between Stars. Freedom’s Myth is Brain Lag’s final release of 2022 and its 41st title, a lineup that has doubled since the release of Cloning Freedom.

Media inquiries and requests for review copies or to contact the author may be directed to publishing@brain-lag.com.